Seafood Lasagna Recipe of the Week 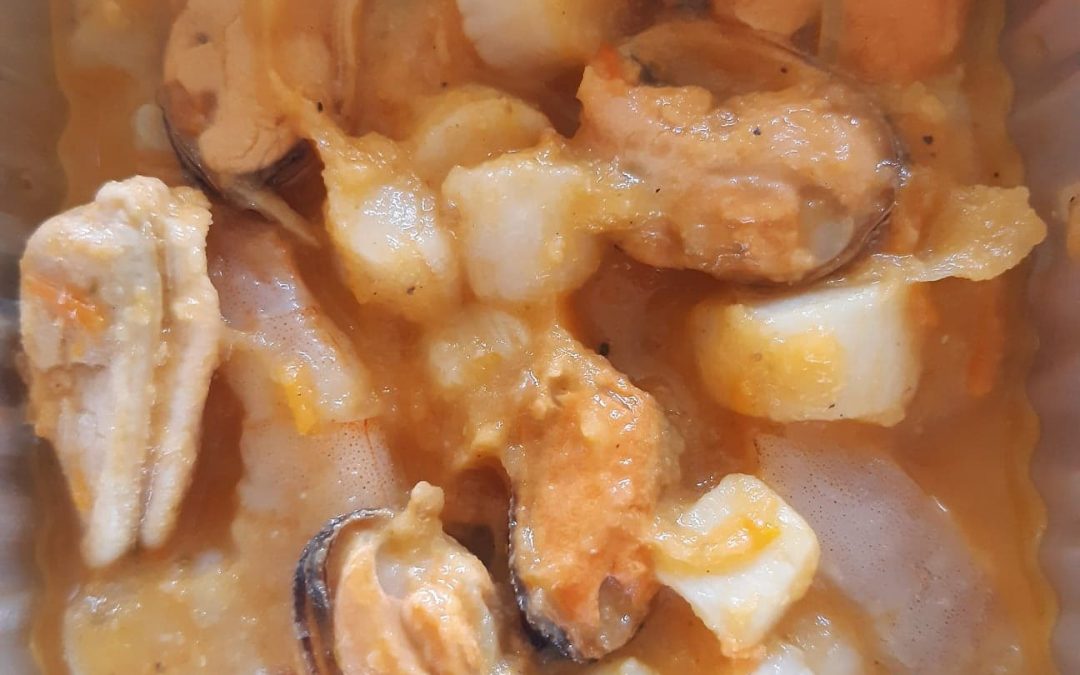 I really enjoyed preparing this week’s fill your fridge menu, why?  Because Seafood lasagna came up in a conversation in our Foodfullness group (https://www.facebook.com/groups/324670368152202/)

It was suggested that one of the best lasagnas eaten was a seafood lasagna from Corsica where the sauce was described as having a sate taste.

This piqued my interest, lasagna is a favourite dish of mine, as is seafood, as is sate, so off I went to do some research to find an authentic recipe.  I was unsuccessful, but did find blogs and pieces written about Corsican food and the seafood lasagna featured as one not to be missed. In fact there were many recipes and some that I will probably put on a future fill your fridge menu.(https://icookyouserve.co.uk/fill-your-fridge/)  While researching, I found that a particular cheese kept being mentioned called Fleur de Marquis. There was one obvious place to go next, so a quick message to the authority on all things delicious – especially cheese – St Giles Cheese. They didn’t stock the Fleur de Marquis but because they had the expertise they directed me towards an alternative Corsican ewes milk cheese called Alta Napita.  A notable feature of both cheeses is that they are rolled in herbs rosemary, birdseye chilli, juniper berries, and fennel.  Interest piqued again! Love my job! This gave me an idea of flavours found in Corsica and in the absence of a recipe I could at least be loyal to the sort of taste to aim for. So less of the basil and more of the marjoram, that the Alta Napita was rolled in.

I enjoyed reading http://blog.misselisabeths.com/ about the bees in Corsica – apparently they are as much a part of your dining experience as the waiters, friendly and just interested in trying your food. So much so it is advised to make an offering as such on a small side plate for the bees to feast on while you enjoy your meal. The trade off is the amazing honey they supply; it’s unique and got more than a mention in the blogs from various travel writers.

In the absence of an authentic recipe this is what I prepared.

I flavoured rapeseed oil in a teaspoon of rosemary, fennel, chilli, juniper berries, and garlic. I then took  equal measures of scallops, mussels, and king prawns and used the oil to very gently sauteed for just 2-3 minutes just enough to coat and take of the flavours.

For the tomato sauce: Saute an onion for 2-3mins, add 3-4 cloves of chopped garlic and a tablespoon of tomato puree, and marjoram and stir for a further 2-3 mins then add some previously roasted cherry tomatoes in garlic and basil cooked in the oven for about 30mins. Whizz this all up so the sauce is smooth and season to taste. Add the seafood mix to the sauce and try very hard not to just eat it all there and then!

I combined cream, what was left of the Alta Napita and some soft nutty goat cheese to make a creamy cheese sauce.  Adjust the quantities according to how much flavour you want it to have. I left mine quite runny as I want it to run into and add to the flavour of the seafood mix and rather than be a separate layer.   Assemble the lasagna, starting with the seafood mix, then a lasagna sheet, then cheese sauce and repeat.  I finished with a little bit of cheddar and garnish with marjoram to give it a crust once in the oven. 180* 20 mins.

Now all i want is a plane ticket to Corsica